Spring has sprung in the Bay Area. Although, you may not be able to tell by looking outside. While we’re temporarily enjoying this much-needed wet weather, we’re looking forward to the rosé-er days ahead.

Spring in the City means one thing for San Franciscans: a calendar filled with day trips and weekend getaways to the Sonoma Wine Country. As usual, we know just the spot to add to your #SonomaMustList for wine tasting in downtown Sonoma. Tasting rooms aren’t hard to come by in downtown Sonoma, but few can compare to the charming and historic Three Sticks Wines.

Three Sticks Wines at The Adobe

Located just off the historic Sonoma Plaza is Three Sticks Wines, which was founded in 2002 after surfer and vineyard owner Bill Price (William Price III — get it? “Three Sticks”?) purchased the ultra-premium Durell Vineyard from Ed Durell in 1998, one of the many vineyards the winery sources grapes from.

In 2012, Bill and Eva Price sought to purchase the historic Casa Vallejo-Casteñada Adobe to open a wine tasting room that would best showcase their acclaimed wines. Built in downtown Sonoma around 1842, the Vallejo-Casteñada Adobe is the oldest occupied residence in Sonoma, and is one of the last remaining buildings in town from California’s Mexican Period.

If you’re interested in this period of California history, be sure to also check out Mission San Francisco Solano, La Casa Grande, Sonoma Barracks, and the Blue Wing Inn, all in Sonoma.

Over the years, ownership of the Adobe was handed over many times. When it was finally purchased by Bill and Eva 170 years later, they wanted to maintain the heritage and original elements of the Adobe, while making it warm, vibrant, and modern. So, they partnered with the renowned San Francisco designer Ken Fulk and his Magic Makers, the masterminds behind Sean Parker’s wedding of the millennium.

Ken Fulk’s Magic Factory came through, creating a modern wine tasting salon with authentic old world charm. Try to take two steps anywhere inside The Adobe without stopping for an Instagram picture. Even in the bathroom. Seriously.

Now, what’s more important than the atmosphere? The wine, of course! The combination of Three Sticks’ luxurious, private atmosphere and refined wines is a winning one.

We tasted six wines with excellent food pairings from neighboring restaurant the girl & the fig, as Ryan educated us on the newly released spring collection of small batch wines. They specialize in Pinot Noirs and Chardonnays, but also produce other specialty varietals. the girl & the fig’s small bites perfectly paired with Three Sticks’ offerings, highlighting the best in each glass.

On the menu were items such as duck rillettes with cipollini onion confit and garden oregano, charred flat iron steak with trumpet mushrooms and black garlic paired with the Moon Mountain Cabernet Sauvignon, and smoke trout on potato chips with crème fraiche and local bottarga paired with the 2016 Sonoma Mt. One Sky Chardonnay. 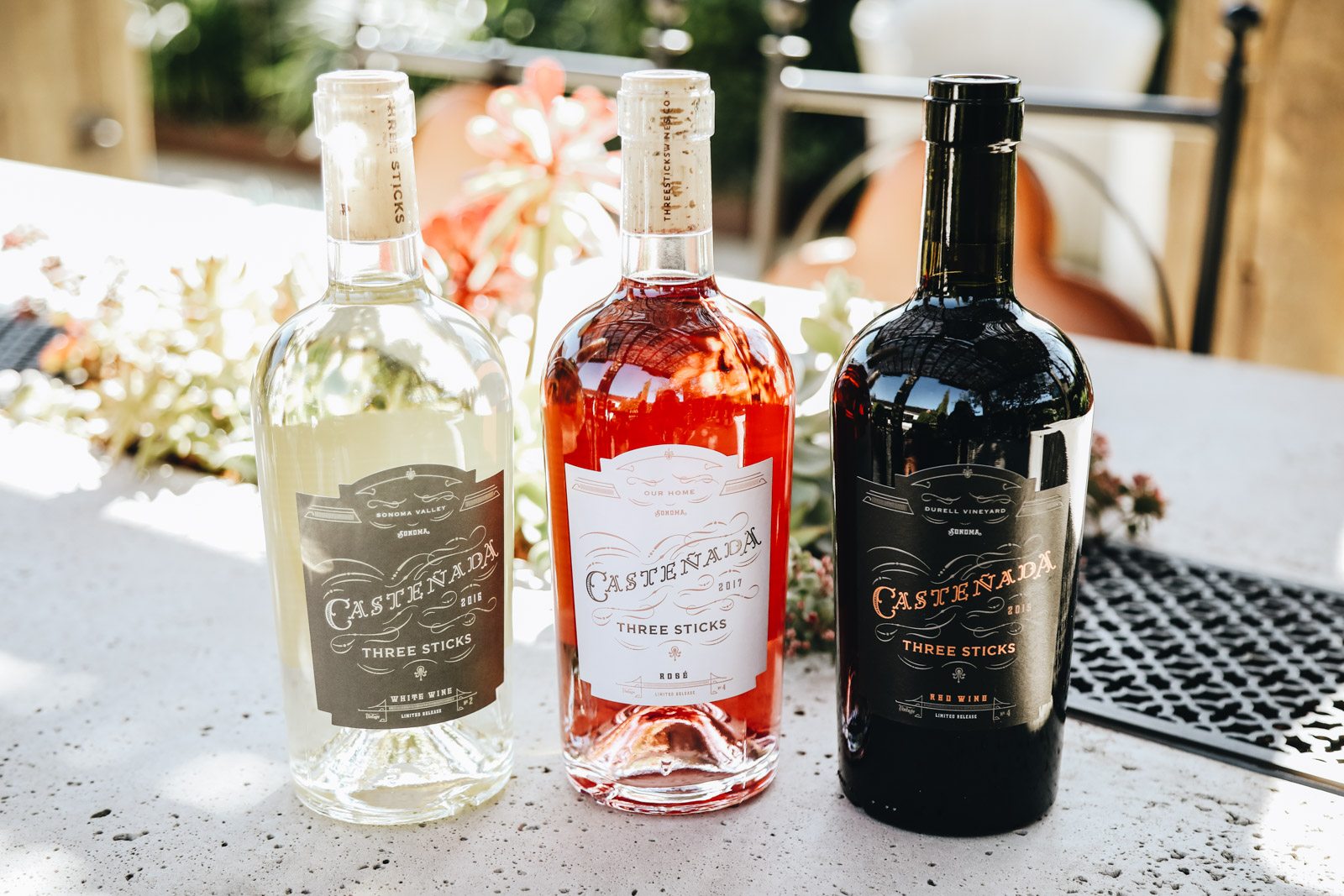 We even got an early taste of the soon to be released Casteñada Rosé. The Casteñada wine collection comes in a petite, stubby vintage liquor bottle, adding to Three Sticks’ old world charm.

Many of Three Sticks’ wines are only available to taste and purchase at The Adobe, and tastings are a strictly by-appointment-only experience. It is recommended that you plan your visit to Three Sticks Wines at The Adobe at least one week in advance. When you call them, tell them you read about them here, on 49Miles.com.